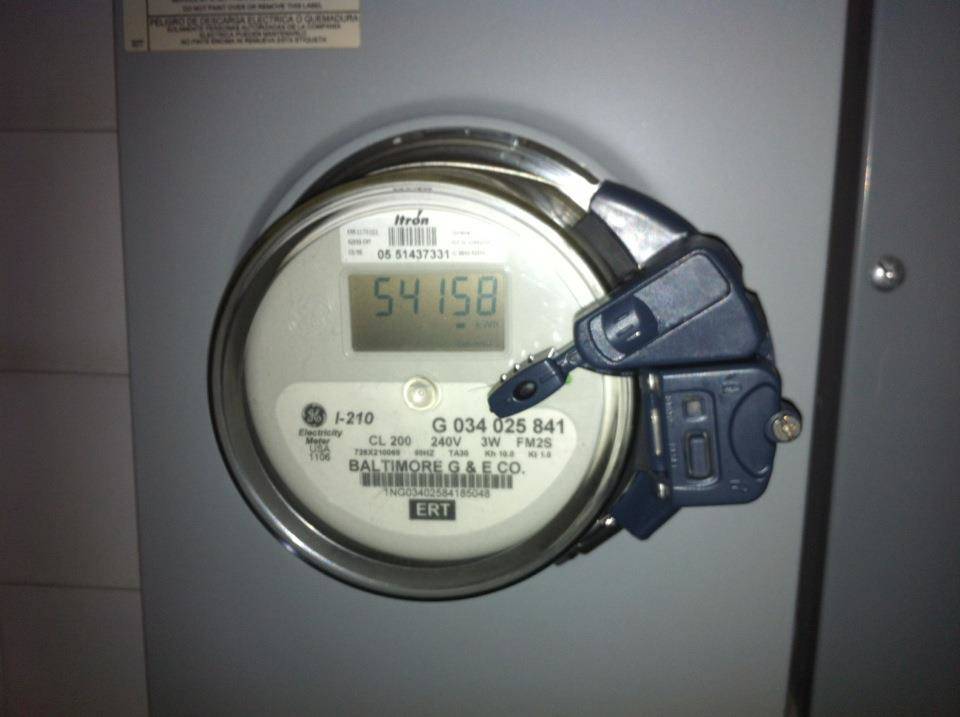 I’ve recently been testing a few products that allow you to see your household energy usage in real-time.  There are numerous possibilities for remote monitoring of household energy data, as well as home automation (think being able to control lights and your thermostat from an iPhone app!). 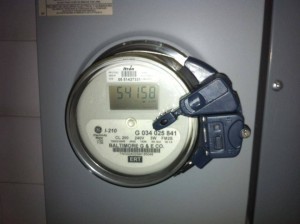 The latest test-drive was a product called the Power Cost Monitor by Blue Line Innovations.  It is an outdoor reading unit that you attach to your power meter with a hose clamp.  It can read live energy usage on almost any meter, and in my case it is reading invisible infrared signal blips.  BGE (Baltimore Gas & Electric)  installed a fancy new meter when I put an addition on my house in 2007.  Most of the meters on my block are the older spinning-disk style meters, and do not have the IR blips.  (From what I have read, each blip represents one Watt-hour of total usage, and the Power Cost Monitor calculates the time between the blips to determine live energy usage accurate to 100 watts)

You can use the camera on your cell phone to see if your electrical meter is emitting infrared signals.  Give it a try, it’s pretty cool. (You may need to hold it very close to the meter to get the IR flashes to show up)

The Power Cost Monitor was not too pricey and was relatively simple to install.  You basically pop in a few AA batteries, install the reader on your meter with a hose clamp, align it with the IR led, and you’re done.  The reader sends information to the display unit wirelessly, and you should start seeing real-time energy usage.  My biggest issues with the Power Cost Monitor were the resolution (only 100W increments), the delay it takes to sense changes (to be expected given it is calculating the intervals of blips that may be many seconds apart), and the lack of any connectivity or expansion (like a USB port, or an add-on uploader module.)  I’ve read about some people who hack these things and pull a pulse off of one of the ICs, send it to an arduino and then send the data wherever, but they are not very easy to implement.

I also discovered what appears to be an identical product, the EM100B Black & Decker Energy Monitor.  I assume this is just a licensing/branding scenario, but for some reason the B&D product costs a lot less. 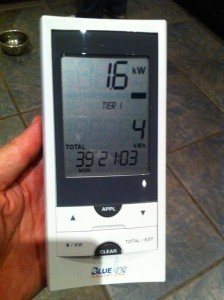 After only a couple of days I’ve seen the energy usage range from 700 watts in the middle of the night to 5kW while running an electric range, television, and lots of lighting.  The response time is a little slow (like 30 seconds) but I can see the usage jump about 600 watts when I turn on the microwave, or about 300 watts when I turn on the recessed lights in the kitchen (75Wx4).

Now, wouldn’t it be cool if you could upload this data to the cloud and access it from anywhere, anytime?   Google had a service that would take this trickle of data and make lots of useful graphs and reports from it, called Google Power Meter, but it went th
e way of the dodo in 2010.  Several other meters have network gateways that connect to your home router and upload the power data to a cloud service.  I haven’t found one that I love just yet, so I may build one myself.

ERT stands for Encoder Receive Transmitter, and is a technology used in remotely reading meters using RF signals.  This is what allows the utility company to read your meter by slowly driving a vehicle down the street instead of going from house to house and visually inspecting the numbers.  If the meter is configured in what is called “bubble-up” mode, it is always sending out power usage information, and there are some home power meters that can use this signal, eliminating the need to physically mount a device on the meter.

Some power meters make use of inductive clamps that are placed around the main lines entering the house.  These can be somewhat more accurate, but are more difficult and risky to install if you aren’t comfortable opening up an electrical panel.

I tested a product called The Energy Detective (TED, or T.E.D.) which uses these inductive clamps.  The reader/sender is actually installed inside the breaker panel, and pulls power from an unused circuit.  It then sends data to the display unit over the electrical system (don’t ask me how, but I am told it is not the same as X10).  What I did notice was that performance was spotty with this thing, and that the receiver would work in some places and not others.  Eventually, it stopped working altogether.  My house is full of dimmers, and further reading showed that T.E.D. does not play well with dimmers.  It’s a shame… it has a USB port and PC software, and would have worked well for my purposes.